Tensions between the U.S. and Russia over Ukraine are exacerbating a shakeout in the aluminum sector, which has been hammered by rising power prices over the past year.

The price of aluminum has increased by 24% over the past six months to more than $3,100 a metric ton, approaching a decade high. The prospect of a Russian invasion of Ukraine has made matters worse. Russia is one of the world’s biggest aluminum producers and traders fear disruptions to its exports if conflict breaks out.

That is adding to the pressure that has built over months of rising energy costs. These have led to the closure of plants in China and Europe that haven’t been able to cut costs deep enough to remain profitable.

In Europe, natural-gas prices are almost five times as high as they were a year ago because of cold weather and a drop in the flow of gas from Russia. Energy can account for up to half of the cost of making aluminum, which is why traders nicknamed the commodity congealed electricity.

Traders fear smelter closures will make it tougher to secure supplies in a market that is used to having plenty of metal to go around. Rising aluminum costs are an added expense for buyers such as auto makers, already grappling with supply-chain constraints including a global computer-chip shortage. 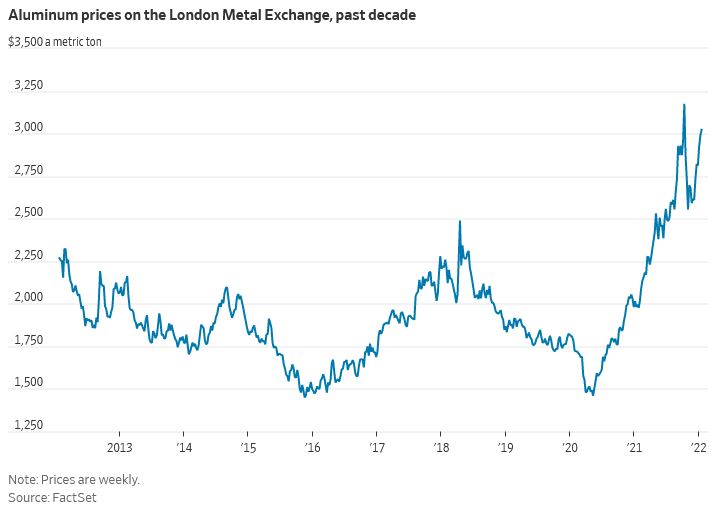 Alcoa Corp. said late last year that it would shut its unprofitable San Ciprián aluminum plant in Spain, which has an annual capacity of 228,000 tons. It will likely be offline for roughly two years because of challenges stemming from what Alcoa called exorbitant energy prices. The price of electricity in Spain hit a record high late last year.

“This has been a challenging road for everyone involved,” Alcoa Chief Executive Roy Harvey said when announcing the decision.

Norwegian aluminum producer Norsk Hydro AS A also said it would cut output at a plant in Slovakia to 60% of its capacity in response to electricity prices which show no sign of falling in the short term.

Other companies that own aluminum smelters in places including Montenegro, Romania and France have also laid out plans for production cutbacks. Those follow a string of cuts from producers of the metal in China amid a power shortage there.

Smelters have recently taken about 810,000 tons in annual production capacity in Europe offline, according to Lynn Zhao, a commodity strategist at Macquarie. With several million tons also out of action in China, about 4 million tons of capacity have been closed or mothballed globally as energy prices run high.

There are several more smelters in Europe that might have to cut production or close over the next few months if energy prices don’t retreat, analysts say.

Already, stockpiles of aluminum in warehouses approved by the LME have shrunk to fewer than 850,000 tons, the lowest level since 2007, according to FactSet. In March 2021, they stood more than twice as high.

Metal in LME-approved sheds gives a glimpse into global supplies and can be misleading. However, analysts and investors say reduced stockpiles in warehouses viewed as a market of last resort are a sign that overall supply is short.

Based on known closures, Morgan Stanley estimates aluminum supply could fall 1 million tons short of demand in 2022. Shipping bottlenecks are still making it difficult to move aluminum to areas clamoring for it.

Roughly 67 million tons of primary aluminum—derived from raw material rather than scrap—is produced world-wide each year. China accounts for more than half of global output, while the U.S. is the world’s biggest importer of the metal.

A recovery in China’s production could quickly boost global supply. However, policy makers in Beijing want to cap aluminum production to control carbon emissions following a yearslong expansion that left the world awash with metal.

“For probably the last 15 to 20 years, the Chinese have just created a glut of oversupply and you see that rebalancing now,” said Graham Kerr, chief executive of producer South32 Ltd.

Among investors betting on a continuing rally is Luke Sadrian, chief investment officer at London-based hedge fund Commodities World Capital. He thinks prices could rise above $4,000 a ton, but that they won’t move in a straight line.

“When you close an aluminum plant down you’re not just doing it for a couple of days,” Mr. Sadrian said. “Because of the power situation going on now, aluminum might start to trade like an ore in short supply and be a lot more volatile.”